The Indian Pulse Polio Programme was one of the most monumental public health initiatives taken in any part of the world. In just 10 years’ time, a country of over 1.2 billion people was free of any cases of polio. India recorded its last case of polio in the Howrah district of West Bengal in the year 2011. 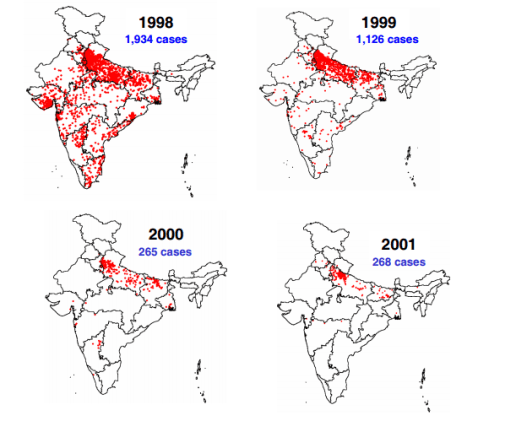 The decline in the number of cases of polio in the first four years (Picture Credits: Unicef )

The vaccine-immunization Cold Chain is the system of transporting, storing and distributing vaccine in a potent state at recommended temperature till it is administered to an individual. The cold chain is not simply a series of warehouses and refrigerated containers, isothermic boxes and portable ice-boxes, it also involves intermediate phases in which transporters, programme administrators, warehouse workers and vaccinators have a part to play. The three broad elements of the Cold Chain are:

The Oral Polio Vaccine(OPV), being one of the most unstable vaccines to be used, with a stable life of only 6-8 months, OPV needs to be stored under exceptionally low temperatures ranging between -8 to -25 degree Celsius. OPV is known to be very unstable at temperatures above 40 degree Celsius and almost ineffective at 50. Such temperatures are not rare in northern parts of India where negligence in not an option. Concerned personnel are required to store OPV vials in Deep Freezers and Ice-Lined Refrigerators.

The supply chain for OPV vials entails a number of steps and intermediary storage points. Vaccines typically arrive at the primary stores called Government Medical Store Depots (GMSDs) where stock is maintained for maximum of 3 months. There are 4 GMSDs in the country (Karnal, Chennai, Mumbai and Kolkata).Vaccines then are transported to state vaccine stores and through divisional and district vaccine stores they reach the last storage points called Community Health Centres(CHCs).

The most volatile vaccine required the most expansive system of tools and equipments. Some of these equipment are:

A small yet vital part of eradicating the Polio virus and allowing for a massive immunization – campaign to be successful in India was a well planned and executed cold supply chain. All operations panned out successfully in-spite of the OPV vaccine being highly vulnerable to weather changes and high temperatures. On the 27th of March 2014, India was given the Polio-free certification by the World Health Organization.