“Ice-cream”, the very word brings a smile to most faces. It is something loved by most. Available in various sizes and flavors, ice-cream is the world’s favorite desert, usually made form milk and other dairy products.

Ice-cream products form a major part of the Indian Food Retail Sector. Ice-cream is available everywhere, right from your nearest provisional store to the city shopping mall to the occasional man who comes selling ice-cream on a lazy summer day on a bicycle. Rural or Urban, Ice-cream is known to bring smiles across the country.

Indians have enjoyed the taste of ice-cream for many centuries now. The traditional Indian frozen desert known as “Kulfi” has been around since the time of the Mughal rulers. Even today, Kulfi remains to be consumed in most parts of India and is sold by indigenous sellers who often prepare it themselves in their homes. 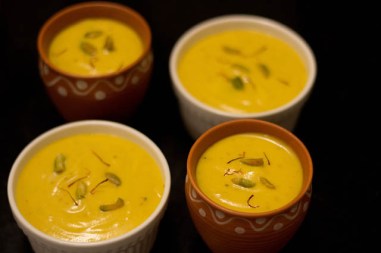 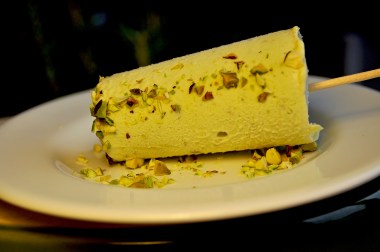 Picture : Pista Kulfi stick (one of our favourites)

Today the Ice-cream sector is valued at over Rs. 2,000 crore and is seeing a 20% growth (by value) each year. 50% of the market consists of organized manufacturers and brands. The per capita volume of ice-cream consumption in India is low at 350 ml per year. Whereas  the same figure is 23 litres for the USA and 18 litres for Australia. There are several factors that contribute to these low figures. Lack of an extensive supply chain network to extend ice-cream supply to villages, erratic power failures and low income levels are some reasons responsible for the low consumption figures in India.

The Indian Ice-cream market as we know it, has developed more recently. Most of the groth has taken place in the 15 – 20 years with the arrival of organized ice-cream brands. The third largest producer of Ice-cream in India, Vadilal, was the first large scale Ice-Cream company to be founded. The company began production in the year 1906 from a factory in Ahmedabad in Gujrat. The largest company in the sector, Amul began production in the year 1996 with the tagline “Real Milk, Real Ice-cream”.  The top three companies, namely Amul, Kwality Walls and Vadilal account for over 35% of the total Indian Ice-Cream market.

Indian brands sell ice-creams of various flavors, shapes and sizes such as cups, cones, sticks, family-packs, party tubs, etc. A key observation about Ice-cream sales is that people prefer brands that have more number of flavors to offer. Today, Amul itself sells 40+ different flavors of ice-cream.

More recently, we have also seen western-luxury ice-cream brands such as Dairy Don, Häagen-Dazs, Magnum and Baskin Robbins coming to India as the income levels of the Indian consumers get better.

The supply chain for ice-cream consists of a network of cold-rooms, intermediary cold storages, cold warehouses, cold transport trucks and the distributors that are responsible for the supply of ice-cream units from the factory to the points of consumption. Cold rooms are the primary storage points usually located within the production facility or in its close neighborhood. The minimum temperature that needs to be maintained here is about -18 degree Celsius. Supplies of Ice-cream are then transported from Cold Rooms to the various markets or secondary storage points using cold chain services. Usually Ice-cream manufacturers assign cold-transportation operations to professional cold logistics companies.

As much as 60% of all the ice-cream sales happen between the summer months of April to June, whereas the sales are relatively low during the cold months towards the latter part of the year. India being a tropical country experiences an extremely hot summer. High temperatures make the maintenance of the ice-cream cold chain difficult and expensive. 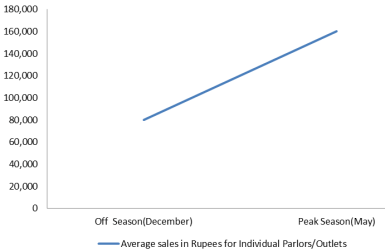 Sales figures  for off-season and peak-season

It becomes extremely difficult for indigenous local ice-cream makers to produce and store ice-cream for longer duration’s. Also, the lack of cold chain infrastructure makes it difficult for the organized brands to percolate into the rural markets, where small-local players continue to dominate.  These reasons make the rural areas which host a majority of the Indian population to remain neglected. Brands refrain from spending their money to expand into geographies with limited to no cold chain infrastructure.

Factors supporting the growth of Ice-cream consumption in India: 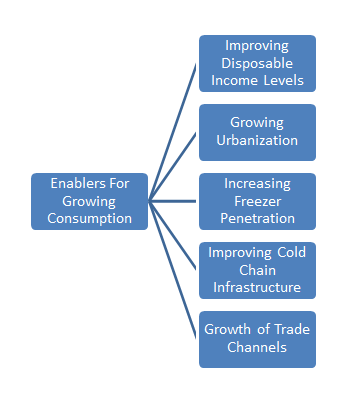 The market is seeing a huge growth of around 20% each year. But the urban markets are already seeing as large as 1 to 2 litres of per capita ice-cream consumption, while the same figures for the rural areas stand low at 50 to 100 ml per year. With volumes so large, the market for ice-cream in the cities seems more or less exhausted. It is only the spread of the supply chain into rural, more remote parts of India that can provide long term growth and expansion.

The challenge is to get consumers in urban and rural India to stock their refrigerators with ice cream and eat more of it. But not everyone in rural India would think of owning a refrigerator – around five in 10 houses do not have access to electricity (six to eight hour-long power cuts during the summer months makes it difficult for us to sell in the rural market). Of the roughly 80 lakh refrigerators sold in India annually, 35 percent get sold in rural and semi-urban markets.

The ice-cream supply chain is a complicated supply chain with many moving parts. Standardization of cold chain services to manage the ever-changing demand across diverse areas of the countries continues to be the want of the industry. Having stocking points and faster and efficient methods of supply to the market is what is missing in the rural part of the country.

So yes there is demand and lots of it. As Indian’s we love our ice – cream but can we get it to the consumer regularly and just when they want it? Is that the question to address?